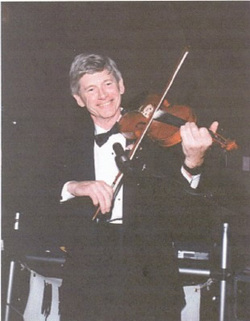 A tribute to the late Sean Walker- by Rick Muir, fellow musician

On March 20, 2006, a great sadness befell the Irish community of Rochester, NY -- that was the day our beloved Sean Walker lost his battle with cancer. For decades Sean (also known as John) had shone as the beacon of Irish music in this corner of America: our finest Irish fiddler, a member of our Tom Finucane Branch of the Comhaltas Ceoltoiri Eireann, and one of our very few direct links to traditional music back in Ireland itself.

Sean Walker was born in October of 1934 in the hills of Rooskagh East, not far from the town of Newcastle West, in the County Limerick, Ireland, the youngest of four children in a strong, loving farm family, where hard work, faith, and music played central roles in their rural surroundings. His father died when Sean was only three years old, so his relationship with his older sister, Mai, grew deep and strong, while his oldest brother, George, served not only as a musical mentor but also as a father figure during Sean’s childhood.

Sean took up the violin at the young age of eight. At that time his brother George, being around age fifteen and casting about for something to do on his Sunday afternoons, started spending time with a local fiddler, Paddy Ahearn, whom he idolized and very much wished to imitate. A bachelor living with his bachelor brother, Paddy was extremely nearsighted, but he could read music, a talent quite rare in those days. In addition, Paddy owned a copy of O’Neill’s Music of Ireland, so his repertoire was the envy of the area. George’s mother bought him an old fiddle at O’Neill’s Hardware in Newcastle West for a one pound note, after which George and Paddy would wile away their Sunday afternoons chatting and fiddling. Not a penny ever changed hands -- it was merely a social event. Initially, Sean would try to imitate on George’s fiddle the tunes his brother could play, but eventually Sean acquired a fiddle of his own. He fashioned a bow out of a twig and some horse hair (His family had some horses on their farm.), but unfortunately, the horse hair would not retain the rosin for more than five minutes -- apparently it was the wrong kind of horse! After that, George made a point of sharing with Sean everything he learned from Paddy Ahearn.

Sean’s first big public appearance in the music world occurred when, at around nine years of age, he played for his first wedding -- that of a local farming couple, the Dillanes. He was chauffeur driven in a hackney car to a hotel in Limerick city, all dressed up in his communion outfit, a proud little boy ready to entertain the wedding couple and their guests.

In the mid forties, during Sean’s teens, the Walker brothers and a neighbor, Tim Aherne, set up an open air platform at Rooskagh crossroads close to home. It proved to be a big success. John and George supplied the music at 2 pennies per head, and folks could dance their feet off, mostly reel and polka sets. In 1948 George emigrated to America, leaving Sean to carry on the music with his talented flute-playing cousin, John Joe Harnett. At this point they began playing at a greater variety of events, including ceili dances and concerts. They continued to play music around West Limerick for another five years, until Sean himself emigrated to America, where he was able once again to join forces with his brother, George.

Sean’s characteristic intelligence and integrity surfaced early on. He had spent three years in second level education when his mother was asked to let him work as a shop assistant at Phelan’s hardware shop in Newcastle West. Although Sean and his family were from humble means, the Phelans quickly learned he was a loyal and trustworthy young man. They often asked him to care for their store and finances while they were busy with other things. Mr. Phelan, the owner, respected Sean so much that he invited him to join the family at mealtimes.

In 1955, on his 19th birthday, Sean emigrated to America in search of new opportunities and joined his brother, George, and sister, Mai, in Rochester, NY, where they both introduced him to the strong Irish community here. Sean held several jobs before being drafted in 1958 for a two year hitch in the U.S. Army. During his military experience, the places he traveled and the people he met helped Sean to realize the greater opportunities that could be had with more training and education. His natural desire to want to understand how technology worked led him to pursue a college education in electrical engineering after his honorable discharge from the Army in 1960.

Once settled in Rochester, Sean’s musical talent continued to develop as he connected with the local Irish community. He played his fiddle with George and other musicians at weekly dances at the Harps Club and the Hibernian Club, and listened to Michael Coleman albums as he developed an appreciation for different playing styles. It was at the Hibernian Club that he met his beautiful “Wild Irish Rose” -- a young Irish step dancer and nursing student named Mary Corby, who, on June 14th, 1960, became his bride. They were married at the cathedral in Thurles, Ireland. Once they returned to Rochester, Sean worked full time at the Eastman Kodak Company and at the same time attended night school at the Rochester Institute of
Technology and the University of Rochester. In 1974 he received his degree in electrical engineering from the University of Rochester.

Together, Sean and Mary raised a fine family of three children: Brian, Monica and Sheila. The family made numerous trips to Ireland, as well as around the U.S.; they attended many feises in the Northeast U.S., where Sean would play his fiddle for Irish step dancing competitions that his daughters were in; and then of course there was a seemingly endless succession of glorious late night music and dancing sessions with the extended family plus their many talented musical friends of the Rochester area.

After 37 loyal years with Eastman Kodak, during which he missed only two days of work, Sean retired in 1992. Living a healthy lifestyle, he and Mary enjoyed many happy years in retirement, which included trips to their winter home in Florida (His brother, George, had moved there permanently in
1986.), as well as visits with their children and grandchildren in New Hampshire, Massachusetts, and California. In retirement Sean also continued to derive great pleasure from the many regular music sessions and ceili dances in and around the Rochester area, where he could connect with other local musicians to share their love of Irish traditional music. In October of 2000, the Northeast Region of Comhaltas Ceoltoiri Eireann, North American Province, inducted both Sean and George Walker into their Hall of Fame in a ceremony at the Hibernian Hall in Albany, the capital city of New York State. Sean’s genuine compassion and musical influence on those around him continued to flourish and touch many people in his later years. Many of these same musicians attended Sean’s funeral and the session that followed, where Sean’s brother, George, inspired everyone by playing Sean’s fiddle for the entire evening.

Sean endured his final nine months of painful struggle with grace, courage, and his characteristic touch of humor, supported by his extended family,  while at the same time supporting them with the reminder that “While it is important to plan for the future, we must enjoy the journey we are on
today”. Sean lived this message by sharing his musical passion with younger musicians. Just as he passed his fiddle on to his daughter, Monica, to carry on the family tradition, may the young musicians in the Rochester area continue to deepen their love of Irish traditional music and share that love with others.
Powered by